Free Fire is most trending battle royal game like PUBG. Players need to fight against 50 enemies to win the match. In this Free Fire game Gun and Gun skin is important to get Booyah!. Choosing best gun in right combination is help to win the match. 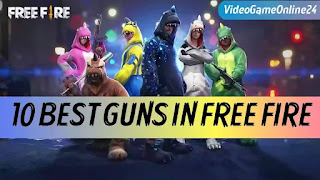 In this post I'll share best guns list which is top guns in Free Fire. In this top 10 guns category all guns are included like Air, SMS, Shotgun and snipers gun. I will choosen best guns for High Damage, Reload Speed, Rate of Fire. You can choose them also with right combination also. 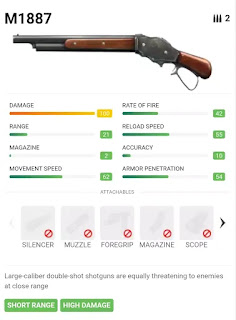 M1887 is one of the best Shotgun in Free Fire. M1887 Gun with Gun skin is dangerous for enemies. It has massive Damage power with good Fire rate. Enemies will take down for its two body shots.
M1887 Gun skin has also come with best abilities. M1887 Gun skin has single Damage with Single Rate of Fire. It is most dangerous gun in Shot range enemies. If you are a short range player you can use double M1887 gun for better performance.
M1887 Stats
Damage : 100
Range : 21
Rate Of Fire : 42
Reload Speed : 55
Movement speed : 62 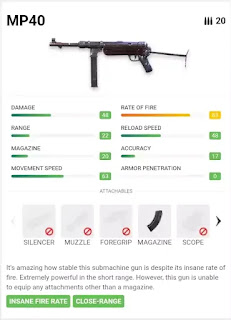 MP40 is basically mid range sub-machine gun in Free Fire. It could be filled with SMG ammo. MP40 is a best and beast gun in Free Fire. It help player in Rank and Clash Squad match. Mp40 is famous for its Damage and Rate of fire and also accuracy. Mp40 could be best combination with Groza, Ak47, Scar, Parafal.
MP40 has 83 High Rate of Fire with 48 Damage. It is best defence gun for Mid range enemies. Mp40 Cobra skin is more damagable and more accuracy gun skin. It has some more skins like Bunny Mp40, New Year Mp40 which is most usable in Free Fire.
Mp40 Stats
Damage : 48
Rate of Fire : 83
Reload Speed : 48
Range : 22 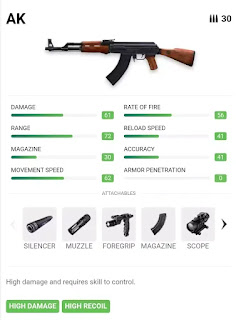 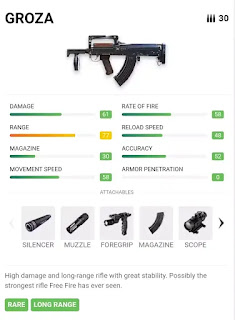 Groza is one of the best long gun in Free Fire. It is alrounder gun with more Damage with Long Range. It is available in Airdrop, Bounty and Boxes. You can add Foregrip, muzzle, magazine, silencer, scope in it to make more dangerous. Groza and M1887 or MP40 is could be best combination in Free Fire.
GROZA Stats
Damage : 61
Range : 77
Rate of Fire : 58
Movement speed : 58
Accuracy : 52
Reload speed : 48 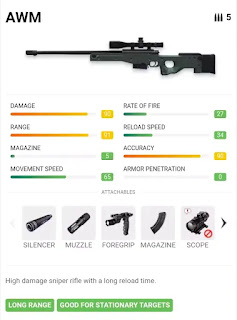 AWM is most damagable sniper gun In Free Fire. Not compared another sniper gun with AWM. AWM has 5 sniper ammo slot. If a player fire in enemies head no doubt enemies will killed directly. But AWM has vary less Fire rate and reload speed. AWM sniper is available only in Bounty, Airdrop in match.
AWM Stats
Damage : 90
Range : 91
Rate Of Fire : 27
Reload Speed : 34 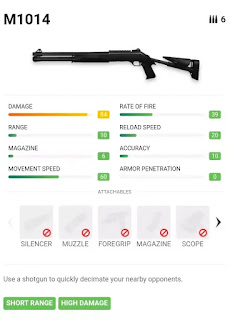 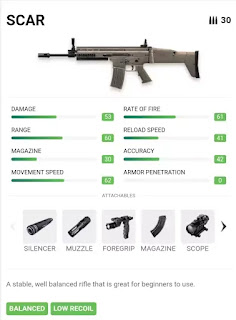 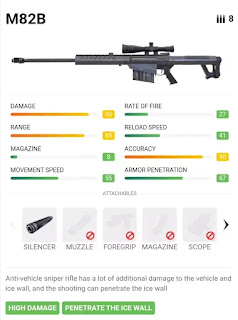 M82B sniper gun is different from other Sniper gun in Free Fire. It helps to break Gloo and take Damage inside the Gloo wall. M82B is most usable gun in Free Fire Rank match. M82B Range and Damage is amazing, it has 90 Damage rate with 85 Range. Also it has amazing accuracy score and movement speed is also good in it. If any player take this gun no one enemy can hide inside the Gloo.
M82B Stats
Damage : 90
Range : 85
Rate of Fire : 27
Reload Speed - 41
Movement speed - 55
Accuracy - 90 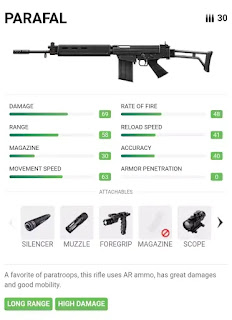 I put Parafal in list for its Damage and Range. I have personally use in Free Fire, its Damage rate is good in Long range enemies. It is used with some special equipment - Silencer, Scope, Foregrip, muzzle. It has 69 Damage rate with 58 Range. Its Fire Rate, Movement speed, accuracy is also good. You can use Mp40, M1887 with it.
PARAFAL Stats
Damage : 69
Range : 58
Movement Speed : 63
Rate of Fire : 48
Range : 41 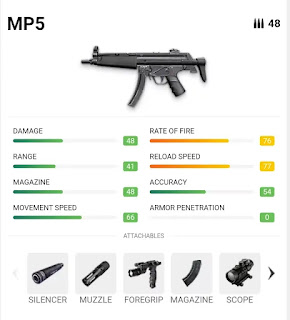 Recently Mp5 is specially used in Clash squad and Custom. Its Rate of Fire and Reload speed is awesome. its Damage rate is not enough but you can use it as a secondary Gun. It has 76 Fire Rate and 77 Reload Speed. Its come with 66 Movement speed and 54 Accuracy. Use all equipment to increase Damage rate. It can be good combination with Ak47, Parafal, Scar.
MP5 Stats
Damage : 48
Range : 41
Rate of Fire : 76
Reload Speed : 77
Accuracy : 54
Next Post Previous Post
2 Comments
Add Comment
comment url
Free Fire 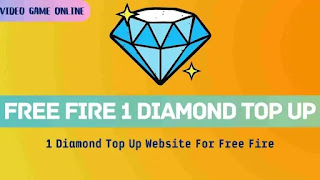 Free Fire 1 Diamond Top Up Website - How To Top Up 1 Diamond In Free Fire? 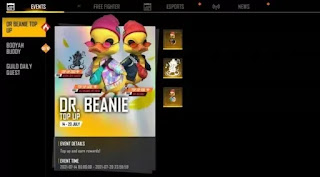 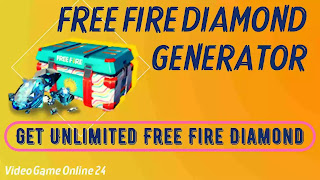 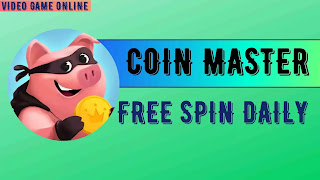 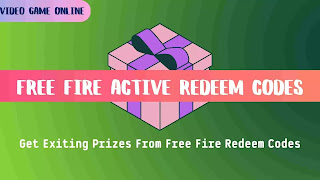